Grand slam week! We just returned from several days in remote locations in western Kenya where we had 2 regional meetings. When we arrived at both locations, I wondered if very many pastors would even know how to locate these places, but they did…967 pastors and leaders in all.

In one place, not even large enough for me to call a town, the chief of that area and his assistant welcomed us! They were both dressed in their official dress and greeted us with huge smiles and handshakes.

After all the years we have been doing this, I still am amazed of the hunger that so many have to receive from the word of the Lord.

These are the regionals we had planned in August before we had to go the the States unexpectedly. The coordinator of one of the meetings told us that when they organized the meeting in August, they had already registered 500 and turned 600 away due to the size of the church. 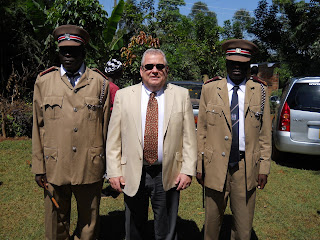 Every place I received such happy handshakes, smiles, blessings and appreciation. They took notes, shouted, laughed, cried and begged us for a CMM conference in their area.

At one place we discussed it over lunch and in the next session the coordinator announced we were having a conference there….trying to leverage us into coming !

I mentioned in a earlier post on FB that since I was missing the Texas Rangers in the playoffs that the regional meetings better be good and what we witnessed this week was better than watching the Rangers. Nothing like a grand slam with 967 pastors going home victorious!