Home » Uncategorized » "Count Me In"

This past week we had the greatest youth camp this nation has ever seen. Supported and organized by Convergence Church and Wellspring Church all from Dallas Texas, we were able to host a total of 1,100 teenagers from all over Kenya, as well as a good number from neighboring Uganda. 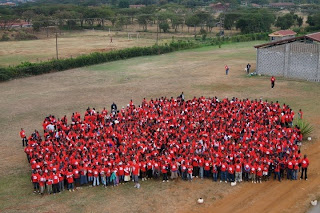 They started arriving on Monday as early as 6 am and continued the whole day until about 9 pm. Even though we had asked students to pre- register this request went unheard as the word spread about “Count Me In Camp at CMM”.

Many of them arrived and immediately started calling their friends. We had parents dropping off their kids and checking out the whole facility to see the high standard of preparations that had been made.

We packed every available space on the property with beddings as we used mattresses’ on the floor as well as the now famous “army cots” that were an instant favorite with the teens. We set up many large tents on the facility and packed them in for warmth as CMM is very cold at night.

Our first service on Monday night saw 300 decisions for Christ and this continued throughout the week. On Tuesday night Pastor Steve Fish from Convergence Church brought a powerful word about life in the Spirit and there was such a hunger for the baptism of the Holy Ghost!

Over 500 spoke in new tongues as the place erupted in supernatural miracles of healing and deliverance. The kids were then treated to well planned soccer and basketball tournaments and thousands of gifts that were brought by Chris and Amber and the team from Convergence and a live concert every night.

By the time Friday morning reached the kids didn’t want to leave. Many wrote testimonies of the great thing they encountered and mainly asked if we could consider doing this for “two weeks” next time. .. Wow.. The Lord continued to be faithful this year as we had another amazing “Count Me In Camp”.

Our thanks and appreciation to Pr. Steve Fish, Chris and Amber white, and the awesome team for Convergence church as well as Tim and Dawn from Wellspring Church and their wonderful team. We can’t wait for 2012. Our goal is 2,000 teens for east and central Africa and beyond…Amen!